“I See a Large benefit to our Emergency Communications operations.
There is always the risk that during a large emergency or disaster. The normal infrastructure, electrical power, telephone service, cell service, internet, etc. will fail.
Amateur Radio has proven itself strong in it’s ability to provide needed communications during these times of need. When Your Cell Phone’s Won’t Work, Our Radios Will!”
Cerro Gordo County Amateur Radio Emergency Coordinator

What is a Mesh Network?

Wikipedia describes A mesh network (or simply meshnet) as a local network arrangement in which the infrastructure nodes (i.e. bridges, switches, and other infrastructure devices) connect directly, dynamically and non-hierarchically to as many other nodes as possible and cooperate with one another to efficiently route data.

This lack of dependency on one node allows for every node to participate in the relay of information.
Mesh networks dynamically self-organize and self-configure, which can reduce installation overhead. The ability to self-configure enables dynamic distribution of workloads, particularly in the event that a few nodes should fail. This in turn contributes to fault-tolerance and reduced maintenance costs.

Below is a Visual representation of an Amateur Radio Mesh Network.

As long as one node can see another, devices on the network can talk to other devices on the network. Each node can relay traffic between nodes. You can see that between any 2 computers or devices, you can have multiple paths, giving redundancy in case one node goes down. Paths of different quality are automatically considered. If one path is worse than another, it gets less traffic. If a node that is in use goes down, the surrounding nodes will automatically figure out an alternate route to pass traffic. Using a built-in format, called “OLSR,” the best route is automatically determined and used. Items connected to nodes (marked below as examples A/B/C/D/E/F) can be any network-enabled device, such as Computers, IP webcams, IP telephones, web, email, or file servers, RMS winlink nodes, network-attached-storage. Anything that can communicate over a standard IP network will work over an Amateur Radio Mesh Network. 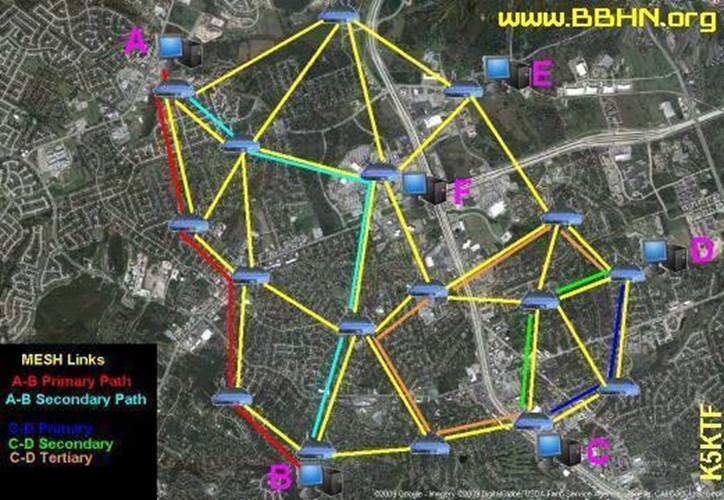 Why is Amateur Radio Emergency Service using it?

Simply Put… Because it works!
Because it is Self-discovering, self-configuring, and fault tolerant, it is GREAT for emergency situations, and Communications Support during events and activities!
This System does not Depend on ANY “other” systems working for it to work.
Even after a large-scale tornado, (As long as the Mesh node is still there) it will still function and be available to emergency responder’s in times of need!

What can we do with it during an Emergency?

Any network-enabled device, such as Computers, IP webcams, IP telephones, web, email, or file servers, RMS winlink nodes, network-attached-storage. Anything that can communicate over a standard IP network will work over an Amateur Radio Mesh Network.

Example 2:
During a Parade, concert,  large public event, or even monitoring a Flooding situation.
We could place an IP Camera, mounted on a tripod, on the roof or other vantage point watching the area of concern.
Allowing for a LIVE camera Feed (or feeds) of that area!

Example 3:
We can connect IP phones through this mesh network.

Your county is participating in a Search and Rescue & you are having issues with the Media or Public interfering because of radio scanners.

You can place a mesh node with a phone at the Command Center and the EOC.
Through the private mesh network, simply call the other location.