Ham Radio is the ability to communicate — across the street, around the world, or even with people and satellites in space!  Even when the power’s out, and the land lines and cell phones don’t work, with a battery, a radio, and a wire, ham radio is there.
Ham Radio lets us enjoy life-long friends, and a hands-on technical education.  It provides the resources and encouragement to experiment with new things and to design and build on the latest communications technologies.
You can’t say that the sky is the limit when there are footprints on the moon!  You can go anywhere you want, without boundaries, and amateur radio can help you get there!

Wireless amateur communication is done on numerous bands (relatively narrow frequency segments) extending from 1.8 MHz (a wavelength of about 160 meters) upwards through several hundred gigahertz (wavelengths in the millimeter range)

To become a radio ham, you must pass an examination. There are Three current Licence Classes.

There is also two licence Classes that can no longer be earned, however those that already hold a licence, are able to keep and renew this Licence Class.

The higher an Amateur Radio Operators Licence Class, the more privileges the operator has! 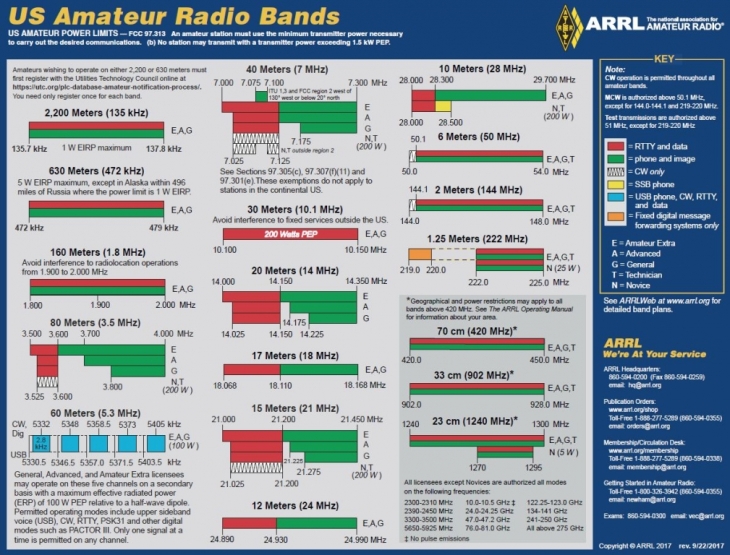 Amateur radio operation is a fun Hobby, and this is one of the main reasons hams do it.
But ham radio can provide communication during states of emergency.
Ham radio works when all other services fail,

After Hurricane Andrew struck South Florida in 1992, the utility grid was destroyed over hundreds of square miles. All cellular towers and antennas were blown down. Only amateur radio, the Citizens Radio Service (“Citizens Band”), and a few isolated pay phones with underground lines provided communication between the outside world and the public in the affected area.

Amateur radio operators are known as technical innovators, and have been responsible for important discoveries. For example, in the early part of the 20th century, government officials believed that all the frequencies having wavelengths shorter than 200 meters (1.5 MHz) were useless for radio communications, so they restricted radio amateurs to these frequencies. It was not long before ham radio operators discovered the truth, and were communicating on a worldwide scale using low-power transmitters. Thus the shortwave radio era began!